Atomic force microscopy is a scanning probe technique that allows non-destructive imaging below the diffraction limit by measuring the inter-atomic force interaction between a sharp tip and the surface of a sample. Soon after the atomic force microscope (AFM) was invented and operated in contact mode [1], a non-contact (NC) version of AFM was demonstrated which relied on the attractive inter-atomic force between a tip and sample [2]. NC-AFMs offer high spatial resolution and have an advantage in protecting both the tip and sample from damage by avoiding direct contact. In general, NC-AFM is mainly for topographical imaging of the sample surface, although some variations can be used to measure sample mechanical properties.

From the early days of AFM, researchers wanted to correlate topography with the chemical make-up of the sample; in other words, not simply to “see” small structures, but also to identify the material from which they are made. This desire led to the development of a hybrid technique called near-field optical microscopy (NSOM or SNOM for scanning near-field optical microscopy) that combined AFM and optical spectroscopy. Early NSOM utilized a cantilever tip with a nano-sized aperture through which light probed the surface of the sample. Although this approach had poor signal-to-noise ratio (SNR) and other problems, it was a breakthrough that demonstrated the concept of near-field optical imaging and hinted at the spectroscopic future that would be enabled by combining AFM with near field optical interactions.

Apertureless SNOM (more commonly known as scattering SNOM or s‑SNOM) was first demonstrated in 1995 by Kumar Wickramasinghe, highlighting true nanoscale spatial resolution which far surpasses the diffraction limit of focused light. However, due to the lack of the necessary tunable laser sources, true spectroscopy could not be demonstrated [3]. Presently, s‑SNOM coupled to a broadband mid-infrared (MIR) light source combined with a Michelson interferometer can perform nanoscale Fourier Transform IR spectroscopy (nano‑FTIR) with a spatial resolution of ~20 nm, roughly the tip radius of curvature for a metal-coated tip.

Although s‑SNOM was the first method to demonstrate near-field optical spectroscopy with high spatial resolution, it is a challenging technique with a few shortcomings – most notably that the useful signal in s‑SNOM originates from light scattering from a tiny region at the tip-sample junction. This signal is often swamped by other scattered light which also enters the detector such as light scattered from the shank of the tip, and light scattered by any topography or roughness on the surface of the sample. Because of this unwanted far-field signal, as well as the lack of sufficiently powerful broadband laser sources suitable for nano-FTIR, s‑SNOM shows poor SNR on most organic and biological samples.

To overcome the difficulties and limitations associated with s-SNOM/nano-FTIR (read more), Wickramasinghe invented photo-induced force microscopy (PiFM), a revolutionary technique that rather surprisingly uses mechanical instead of optical detection to measure the near-field optical interaction between the tip and sample. PiFM leverages local polarization of the sample by tip-enhanced optical illumination, resulting in highly localized forces acting between the tip and sample which are easily detected by AFM.

Mechanical detection eliminates the problem of background scattering seen in s‑SNOM, giving PiFM a superior SNR and greatly enhancing ease-of-use and quality of data on most samples. The basic tip-sample optical interaction in s-SNOM and PiFM is quite similar – the same near field illumination and local polarization of the sample that emits scattered photons in s-SNOM also generates the mechanical forces detected in PiFM [4]. Thus, one might expect s-SNOM and PiFM to have similar spatial resolution; however, PiFM generally shows superior resolution by virtue of its increased SNR for a given tip radius.

In PiFM, the tip-sample interface generates two types of short-range forces: (1) the usual van der Waals (vdW) force that NC-AFM relies on for mapping the topography of the sample surface, and (2) the photo-induced force (PiF) generated by near field illumination. Both forces act over a very short range, coming into play only when the tip is atomically close to the sample surface (~10 nm or less). PiFM utilizes two vibrational modes of the rectangular AFM cantilever to measure the two forces independently – the interatomic vdW force with one mode, and the photo-induced force (PiF) with another. Since the vibration of the two modes is completely independent, motion in one mode generally does not influence the other.

Assigning each of these forces to its own vibrational mode of the cantilever is accomplished by modulating the vdW force at or near the resonant frequency of one mode (as is normally done in NC-AFM by mechanically driving the cantilever vibration and monitoring its response) and modulating or pulsing the excitation light so that it generates the PiF at the resonant frequency of another cantilever mode. Due to the high quality-factor Q of the cantilever resonance, even tiny forces in the range of pN can excite measurable oscillations, making this approach ideal for measuring small photo-induced forces.

There are two methods of modulating or pulsing the PiF excitation light. The direct method is the more obvious approach, with the light modulated at the resonant frequency particular to a cantilever vibrational mode. Forces generated by the modulated light directly stimulate vibration of the cantilever at the same frequency. However, this method is prone to unwanted background signal that competes with the PiF since the cantilever can be set into oscillation even without a sample present. This undesirable excitation is due to both optical trapping forces and photo-thermal (bi-metallic and thermal gradient) forces, neither of which have anything to do with the tip-sample interaction.

Nonetheless, the direct method of PiFM can be particularly useful because it senses optical interactions deep within the sample via thermal expansion of the sample in response to the incoming light – light that extends into the sample well below the tip-enhanced illumination zone. The direct method is therefore sometimes referred to as “bulk” PiFM, since its response is not confined to just the surface of the sample.

The second modulation method, sideband detection, suppresses unwanted background signals and confines the response to an exceedingly small region at the tip-sample interface. Rather than modulating the light at a cantilever resonant frequency, the sideband method makes use of frequency mixing to generate a difference frequency (sideband) at the cantilever resonance. The laser modulation frequency fm is chosen such that f1 = f2−fm, where f1 and f2 are the first and second mechanical resonances of the cantilever, respectively.

Typically, the cantilever is driven at f2 (the dither for AFM topography feedback) while the PiF excitation laser is modulated at fm. In such a configuration, the PiF will be modulated by both of these frequencies. The cantilever dither motion affects the PiF simply because the time-varying tip-sample spacing modulates the intensity and depth of illumination from the tip-enhanced field. Since the illumination source itself is also modulated at fm, frequency mixing produces a sideband component at f2−fm = f1 which thereby induces Q-enhanced cantilever vibration at f1. Lock-in detection of the cantilever motion at f1 generates the background-free PiF signal displayed in PiFM images and in PiF-IR spectra.

Although the tip may still be directly stimulated by the incoming light at fm, this frequency does not coincide with a vibrational mode of the cantilever, so there is no Q-enhancement of amplitude, and any residual vibration present at this frequency is suppressed by lock-in detection. Since sideband detection suppresses responses not originating from the tip-enhanced illumination zone, it is sometimes referred to as “surface enhanced” PiFM and exhibits the highest spatial resolution. By comparing direct and sideband PiFM maps, one can also get an idea of chemical species present on the surface vs. in the bulk of the material.

There is no single mechanism responsible for the generation of the PiF. Instead, there is a rich variety of forces that may contribute.

One such force is the dipole-dipole interaction generated by the polarization of the sample interacting with the polarized tip apex [4]. This force is expected to exhibit a dispersive behavior as a function of wavelength near sample absorption when such absorption arises from a resonant vibrational mode of the sample’s molecular structure. Dispersive interactions are expected to have a characteristic bipolar peak shape in the PiFM spectrum, just as they do in certain types of s-SNOM measurements.

In addition to the above dipole-dipole force, the vdW force (which is technically also a spontaneous dipole-dipole force) is also at work and can give rise to vdW-mediated thermal expansion forces [5]. At absorption peaks, the absorbed light heats the sample, resulting in thermal expansion that causes a bulge in the surface and therefore a reduction in the tip-sample spacing. This effect happens in step with the modulated light, and it exhibits a non-dispersive (or absorptive) behavior in the detected PiF. Non-dispersive interactions are expected to show a simple unipolar spectral peak shape, as is seen on many types of samples.

Another mechanism for generating the detected PiF response may be opto-mechanical damping [6]. In this mechanism, damping of the cantilever’s dither motion at f2 is thought to arise from a change in the mechanical properties of the sample when it absorbs light. If absorption changes the elasticity, or especially if it makes mechanical motion of the sample’s molecules more lossy (inelastic), the vdW interaction with the tip could dampen the tip motion. This damping is time varying at fm, giving rise to intermodulation and sideband frequency generation just like the other mechanisms. Opto-mechanical damping is also expected to show a non-dispersive behavior.

Clearly separating the contributions from these various mechanisms is not always straightforward and is the subject of ongoing scientific discussion. On inorganic samples with large near-field reflectivity such as those where localized surface polaritons are excited by the near-field of the tip (e.g., surface plasmon polaritons in metals, doped semiconductors, or surface phonon polaritons in polar crystals), PiF spectra agree well with s-SNOM’s dispersive spectra, suggesting that dipole-dipole interactions are dominant.

Fortunately, identifying the exact mechanism responsible for PiFM is not necessary. PiF spectra correlate beautifully with the familiar absorption spectra of conventional FTIR and other techniques. PiFM also solves many of the shortcomings of other nano-IR technologies making it much easier and faster to use on a wider variety of samples. Therefore, PiFM and PiF-IR are the ultimate extension of optical spectroscopy to fantastically small volumes. PiFM gives the same answer as FTIR but with far better spatial resolution that isn’t possible in other ways.

Don’t just see it. Identify it! 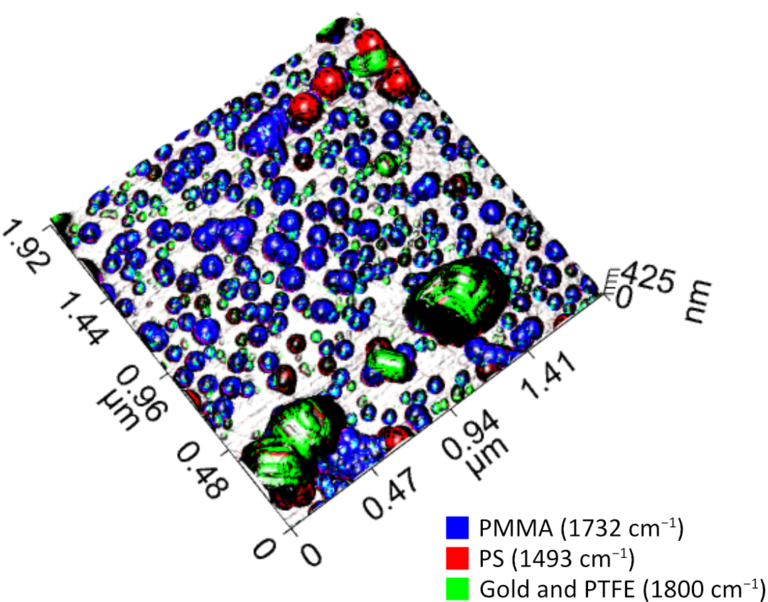 Microplastics, defined as plastic fragments less than 5 mm in length, are classified as primary or secondary...
PDF

Various forms of nano-particles are being utilized as part of nanoscale drug delivery systems. Most… 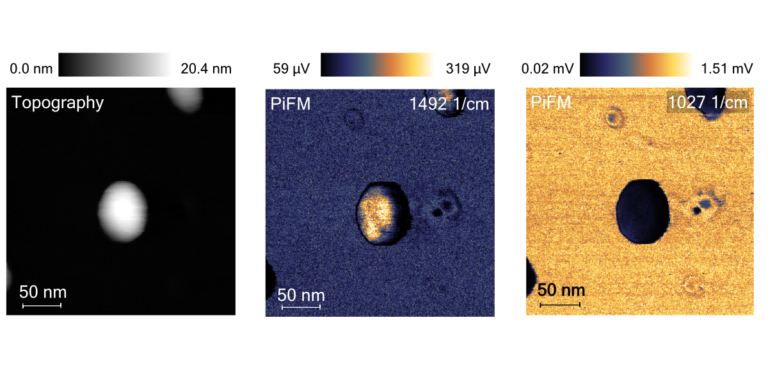 Of critical importance in many manufacturing processes is the management of defects.