While PiFM enjoys excellent traits such as ~5 nm spatial resolution and monolayer sensitivity on organic and inorganic materials, PiFM cannot resolve the real and imaginary parts of the sample’s polarizability separately. Scattering scanning near-field optical microscopy (s-SNOM), also known as apertureless near-field scanning optical microscopy, which was first demonstrated by Kumar Wickramasinghe and his colleagues at IBM [1], adds a far-field detector to a standard PiFM setup to collect the complex near-field signal (as opposed to via a force sensor as in PiFM). By combining an interferometer, the near-field signal is divided into its real and imaginary component. Figure 1 shows the schematic drawing of the s-SNOM setup. One can see that if the components in the dashed box are removed, the setup is the same as a standard PiFM system; in fact, the components in the dashed box are available as an optional add-on for Vista-IR for those who want to add the s-SNOM capability to Vista-IR. Figure 2 shows the detector (in yellow dashed box) as well as the piezo-driven mirror (in white dashed box) for the reference arm of the interferometer that can be added to Vista-IR at anytime after the purchase of the instrument.

Unlike PiFM, s-SNOM must effectively reject the far-field signal and selectively detect the near-field signal. One effective way to do so is to operate the AFM in tapping mode at f0 (first mechanical mode) and detect the scattered signal at the harmonics of the driving frequency, nf0, where n = 1, 2, 3, … Since the far-field should be similar whether the tip is closer or farther away from the surface, and even more so at higher harmonics, a lock-in amplifier (LIA) is used to lock onto the scattered signal at nf0 to selectively collect the near-field photons. In order to measure the optical phase of the near-field signal, a Michelson interferometer is added to the system as shown in figure 1. The reference arm typically consists of a mirror that is sinusoidally driven (at fM) by a piezo element. When such a reference beam is interfered with the near-field signal, the Fourier spectrum of the interfered signal will consist of  harmonic sidebands at frequencies mfM; this is shown in figure 1. Since the signal is spread over several harmonics, lock-in detection on at least one odd and one even harmonics needs to be performed to recover amplitude and phase information. With a judicious choice of phase modulation depth, the other harmonics can be ignored since the two harmonics constitute most of the signal. This method of retrieving the near-field amplitude and phase has been patented and is commonly referred to as “pseudo-heterodyne” technique [1].

MVI uses a different patented technique called Generalized Lock-in Amplifier (GLIA) [2]. GLIA is a specialized digital LIA that utilizes two orthogonal reference signals having the same set of harmonic frequencies that detector sees, namely cos(fR) and sin(fR) where fR = asin(2pfMt), the applied phase modulation. When the interfered signal is de-modulated with GLIA, amplitude and phase of the near-field signal can be determined precisely and simply as if only a single sideband existed for a standard LIA. A simulated comparison of multiple LIA (MLIA, demodulation at two sideband harmonics in this case) and GLIA reveals that GLIA enjoys at least a factor 2 better signal to noise ratio (SNR) compared to the optimal MLIA method (see figure 3). Figure 4 shows topography, s-SNOM amplitude and s-SNOM phase acquired on hBN using GLIA at 1400 cm-1. Note the effective removal of background interference by GLIA.

Referring to figure 1 again, Vista-IR can be operated to acquire both s-SNOM (amplitude and phase) and the PiFM data simultaneously since VistaScope comes equipped with multiple LIA along with a GLIA. The optical paths for the interferometer can be   matched   precisely   such   that the pulsed quantum cascade laser (QCL) can be used for both PiFM and s-SNOM. Figure 5 shows topography, PiFM, s-SNOM amplitude, and s-SNOM phase acquired at 1060 cm-1 concurrently on an all-semiconductor plasmonic grating, consisting of highly doped InAsSb (upper region in topography) and undoped GaSb (lower region in topography) lines. As both techniques are measuring the near-field response of dipole-image dipole interaction, PiFM and s-SNOM amplitude images agree well. The two techniques are complementary since PiFM provides better sensitivity to the dielectric function variations (as evidenced by features observed in the PiFM image that correlate with topography variations – the rightmost GaSb line is displayed with greater contrast to show the topography variations) while interferometric s-SNOM can provide additional phase information. More on comparing PiFM and s-SNOM can be found here [3]. 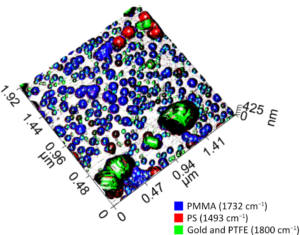 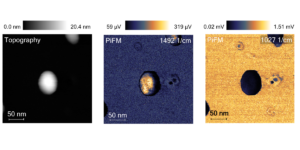 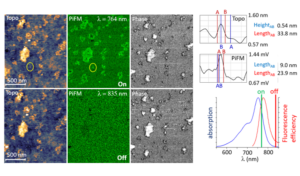